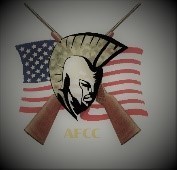 The month of November was eventful for our Ash Fork Cadets.  We kicked off the month with a special Marine Corps Poolee meeting where our cadets learned about the Marine Corps traditional cake cutting ceremony. The customary celebration honors the birthday of the United States Marine Corps which is 10 November 1775.  Cadets and poolees observed the tradition where three pieces of cake are given to three Marines.  Each slice of cake is traditionally cut with the Mameluke sword, a symbol that the Marines are a band of warriors who are committed to carrying the sword so that the nation may live in peace.  The first piece of cake is given to the guest of honor.  The second piece of cake is given to the oldest Marine.  The oldest Marine then gives the second piece of cake to the youngest Marine to symbolize the passing of experience and knowledge from the old to the young of the Marine Corps showing that they care for the young Marines before they look to their own needs.  The oldest Marine then received his cake.  After that, the Marines did what Marines do and they shared what they had with everyone else.  It was a very sweet moment.

After participating in the poolee activities, the cadets reviewed their fitness goals from the beginning of the year and recorded their improvements and set new fitness goals. The standard goals for the pull-up, run and sit ups are 3 military pull ups, 13:00 minute run and 80 sit ups in 2 minutes.  The cadets are proud of their growth and continue to push each other. 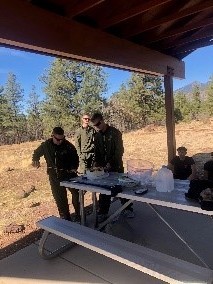 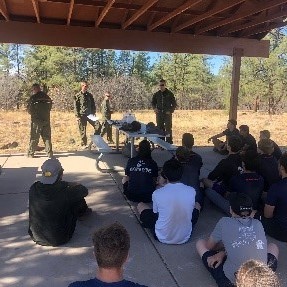